When I laid eyes on Goat Lake and its surrounding snow-capped mountains, I thought to myself, “This is the Washington equivalent of Joffre Lakes!”

Okay, fine. It’s not quite as epic and the water isn’t as turquoise as those belonging to Penticton’s sapphire ponds, but Goat did shine bright blue at certain times of day and the mountains were breathtaking.

The Goat Lake trailhead is a 3.5 hour drive from Vancouver. Listen to a few Rich Roll podcasts, though (this one with Moby is my fav) and the time will fly by. (And, pro tip: stop at the Skagit Food Co-op for smoothies, protein bars, hummus sandwiches and more.) When you hit the Mount Vernon exit, you’ll travel east through a few small towns before hitting the bumpy dirt road that leads you to the beginning of the hike. Other campers had parking passes displayed in their cars, but they weren’t available anywhere on site. We didn’t display anything and ended up not getting a ticket. More hike logistics here.

We’d been on the hunt for an easy-ish hike with beautiful scenery. By the end of the weekend, we’d all concluded the Goat Lake Trail had been perfect. The walk itself (about 2.5 hours up, 2 hours down) was not challenging, although big camping backpacks can turn it into a work-out. On the way in, we didn’t hit much of an incline until the last forty-five minutes or so. There aren’t many markers on the trail, but the path is very distinct. You can’t go wrong. Plus, it’s well-travelled and no dangerous parts. You’ll see at least a dozen parties on your way in and out. The only fork in the road is near the beginning when the trail splits into Upper Elliot or Lower Elliot (they lead to the same point). Pictured below is Upper Elliot, a wider trail with less obstacles and less to see. We preferred the Lower Trail which runs closer to the river and offers more scenery. If we did it again, we’d would probably take Lower Elliot on the hike in and again on the way out. 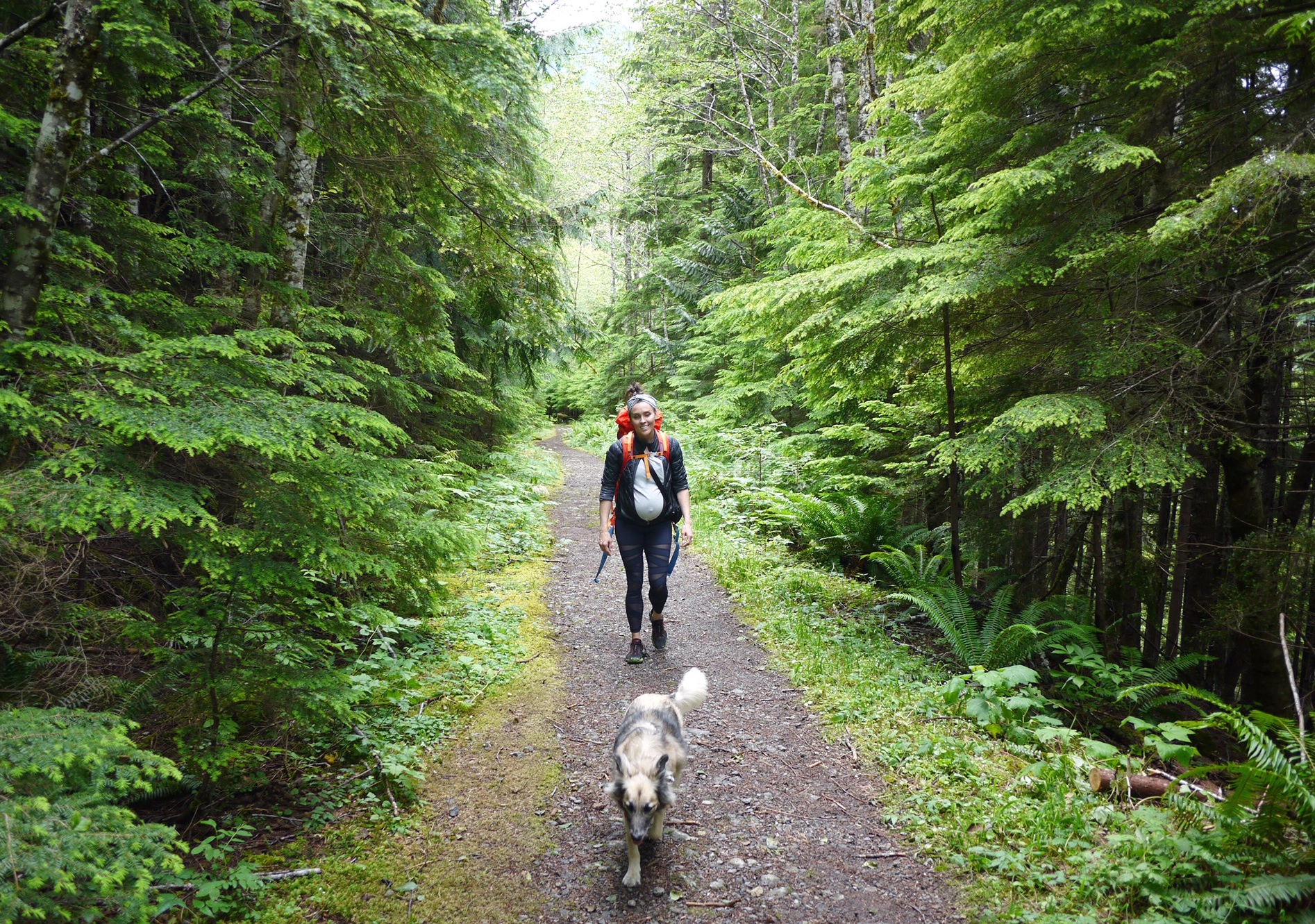 We’d heard warnings about bears in the Washington mountains, but felt really safe considering the number of other hikers and campers there were. Effie was equipped with a bear bell, but we took it off pretty quickly. We’d been hoping to find a secluded camping area, but there seemed to be just one large area where everyone was setting up. They weren’t ‘campsites’ per se, just a forest area with lots of semi-flat spots on which to pitch tents. We had decent privacy, though, and a fire pit to sit around (no fires allowed, though). There was a hole-in-the-ground-style toilet, but no running water. We carted up 4L of bottled water, but noticed many people filling up bags of lake water to boil and use.

This beautiful mountain scene, a two-minute walk from the camping area, was definitely the best (only?) view of the hike. There are a few peep-views of other mountain peaks on the hike in and out, but nothing notable. We heard about a waterfall, but it was too tricky to get to and, from what we could tell through the trees, might be better described as ‘river rapids’.

As for bugs, we noticed a few ticks falling from the trees, but didn’t see any others. There were mosquitos at the parking lot, but none at our camping destination, probably because of the chilly temp (about 5C overnight). If you’re looking for a 100% natural, chemical-free bug spray, try this one from Saje (my fav).

For the hike, my trail runners did the trick. It was pretty muddy in spots, and my hiking partners had hiking boots on, but I wouldn’t say they were necessary. If you’re camping overnight, I recommend bringing lots of warm gear! I slept in two jackets, lulu leggings and sweatpants and a tuque. And I had Effie and Darren to spoon with. They helped.

Goat Lake is set in a valley, so you won’t see a sunrise or sunset, but an early rise is still worth it as the morning water is smooth and glassy, like a mirror. 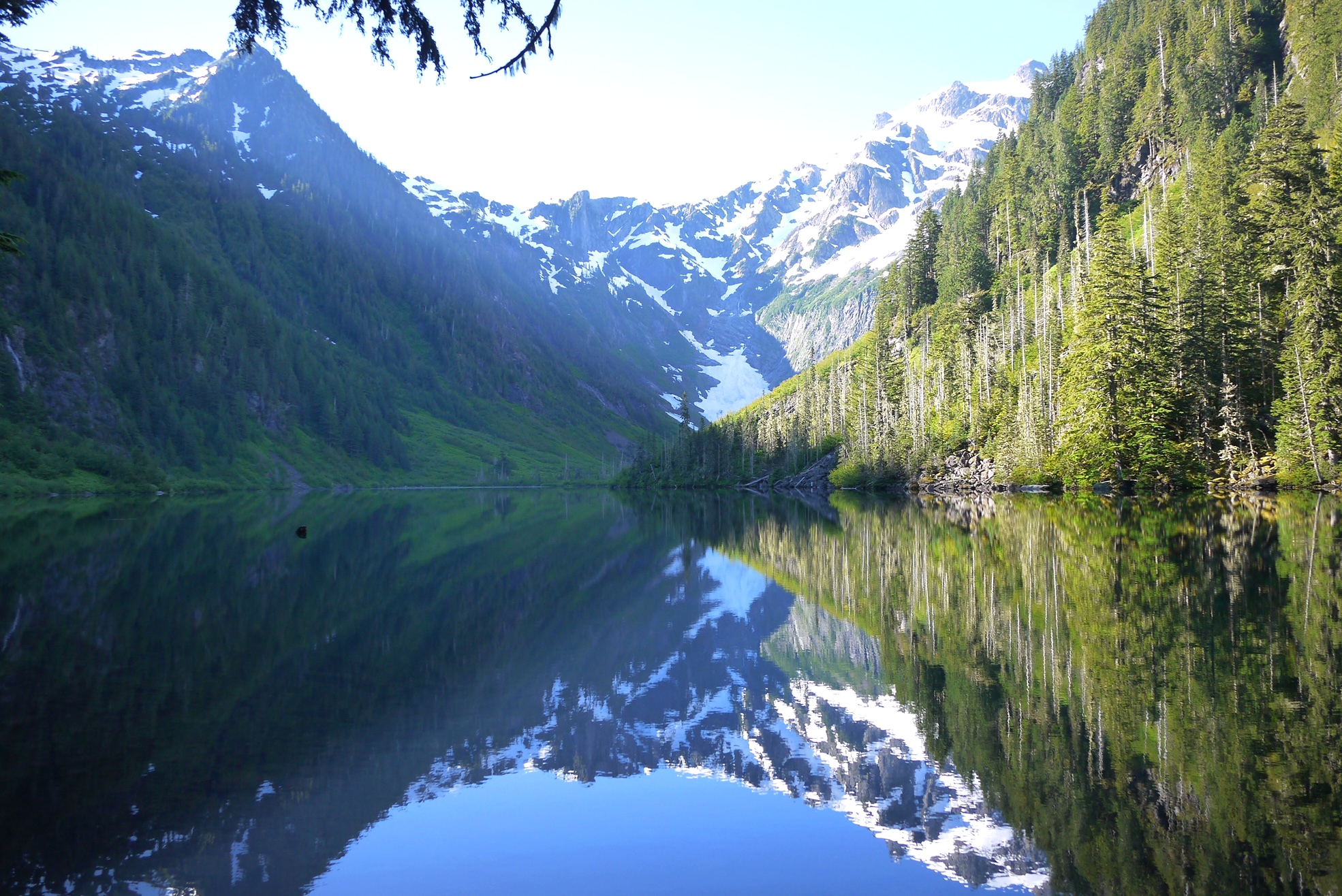 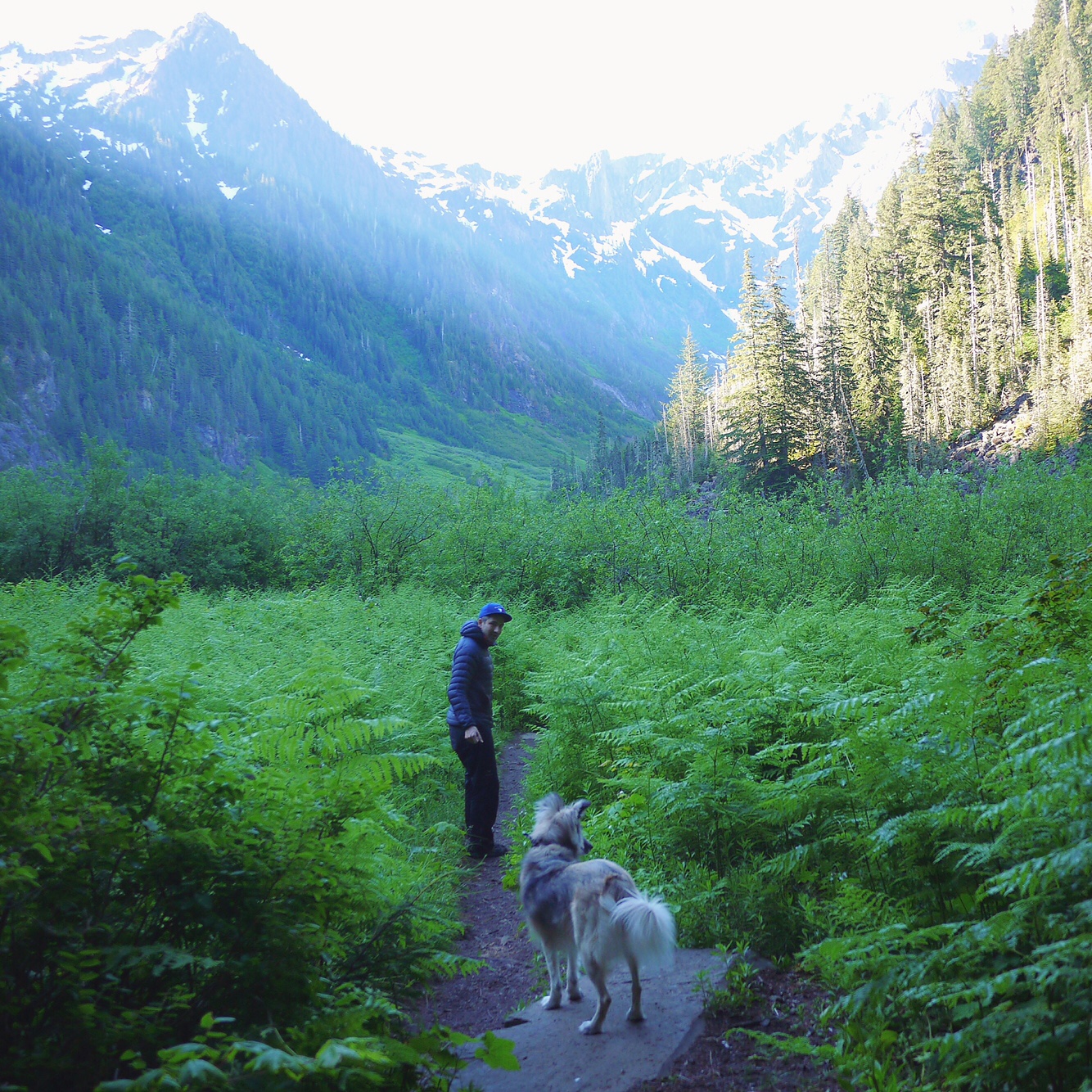 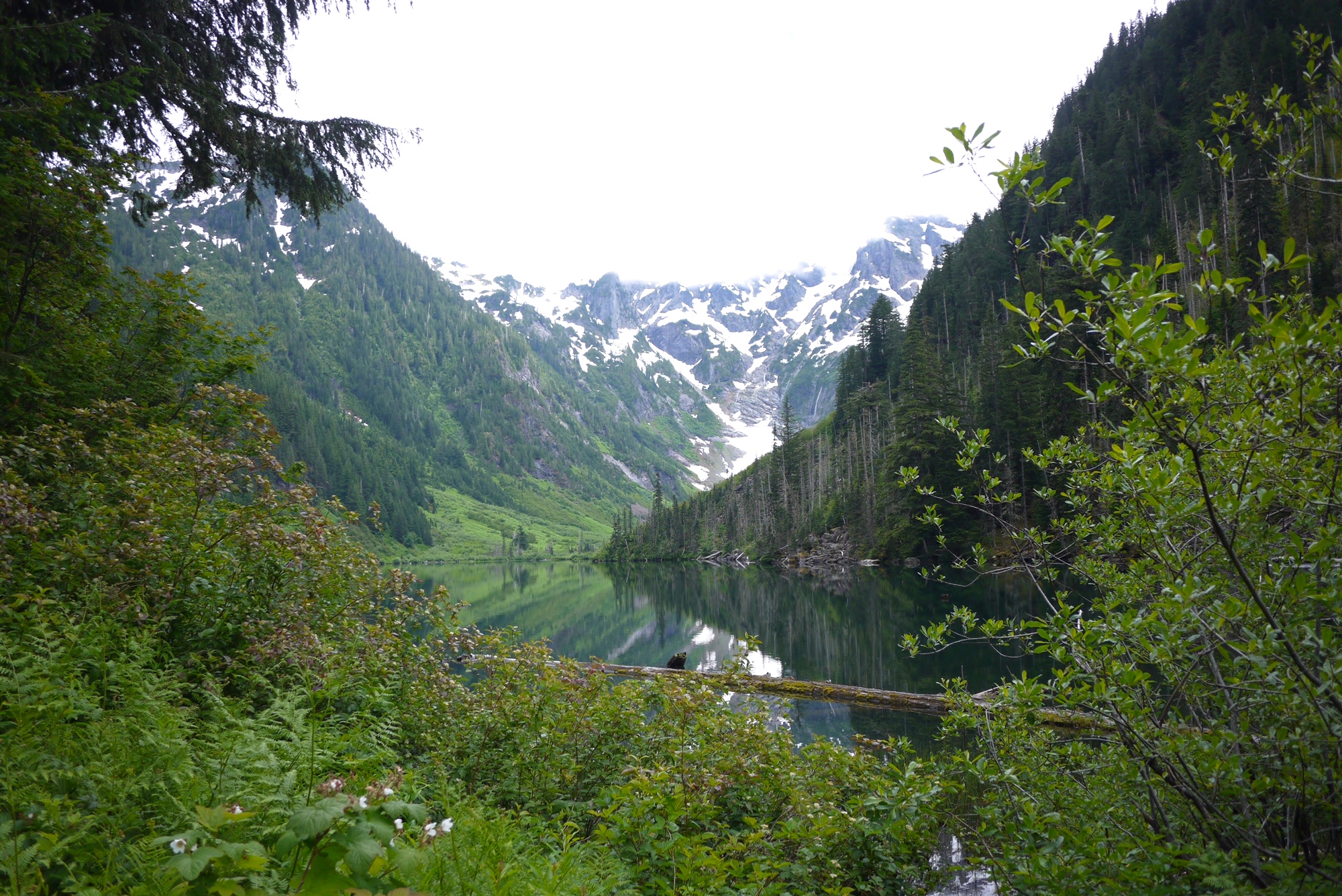 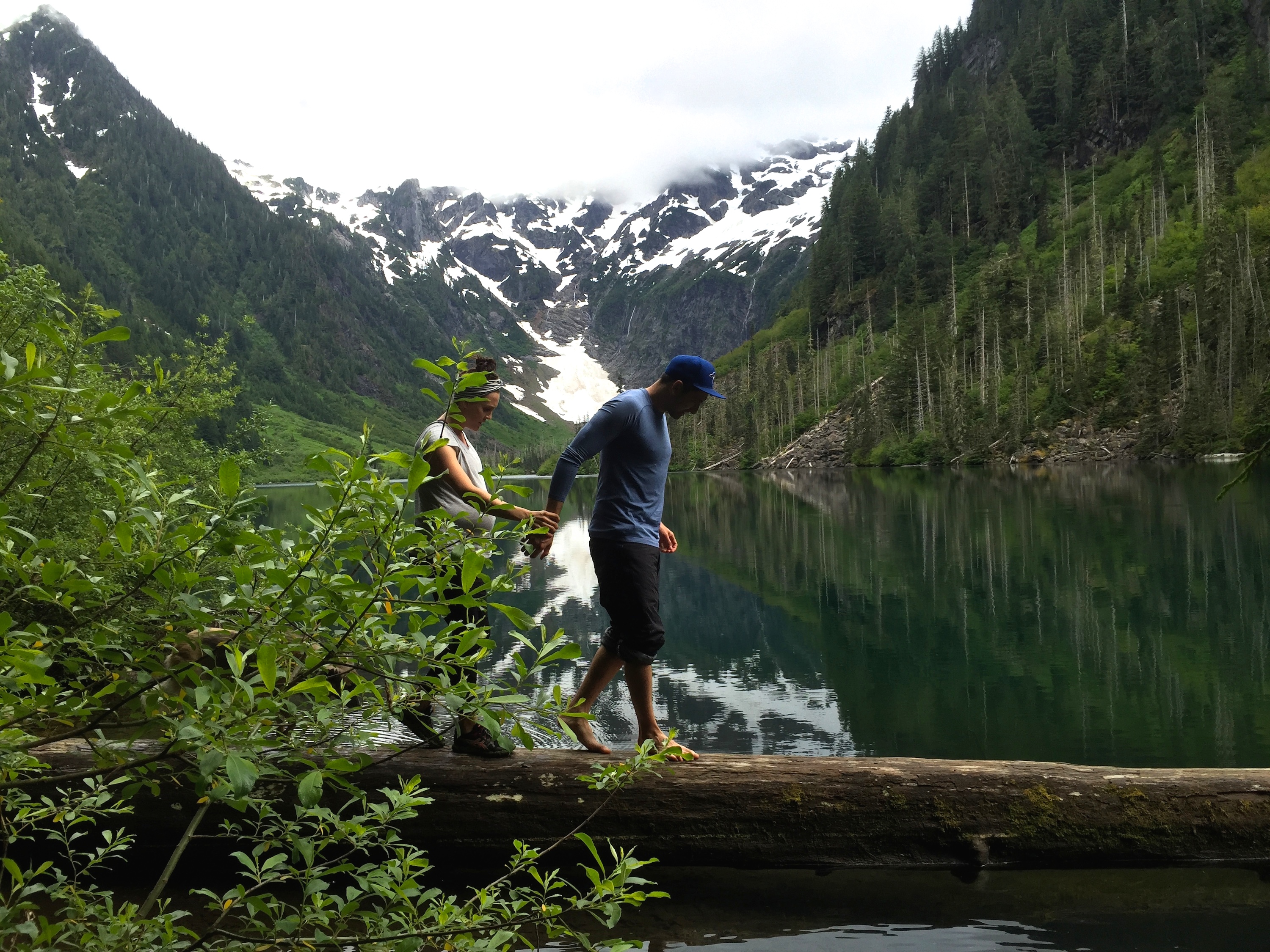 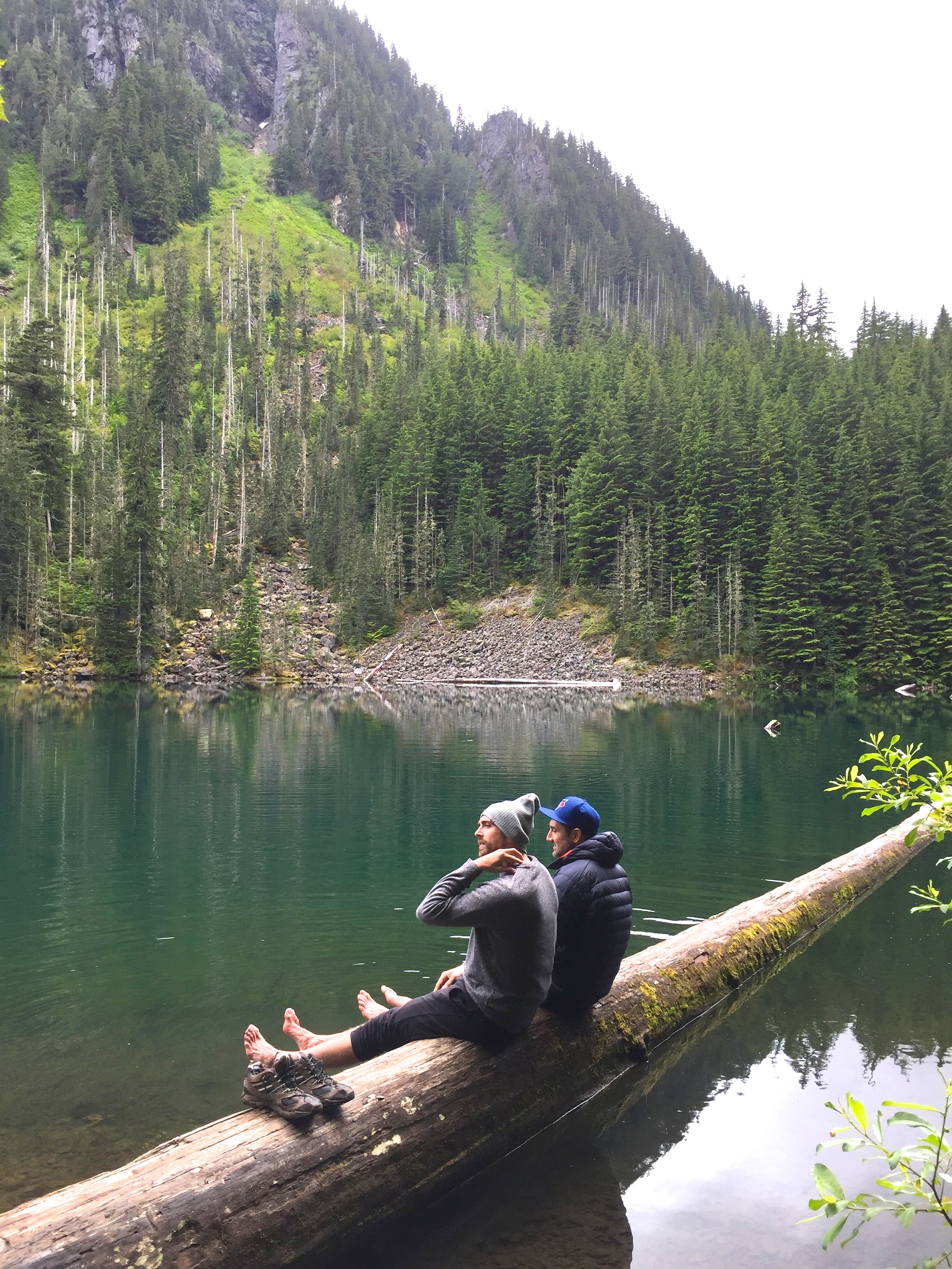 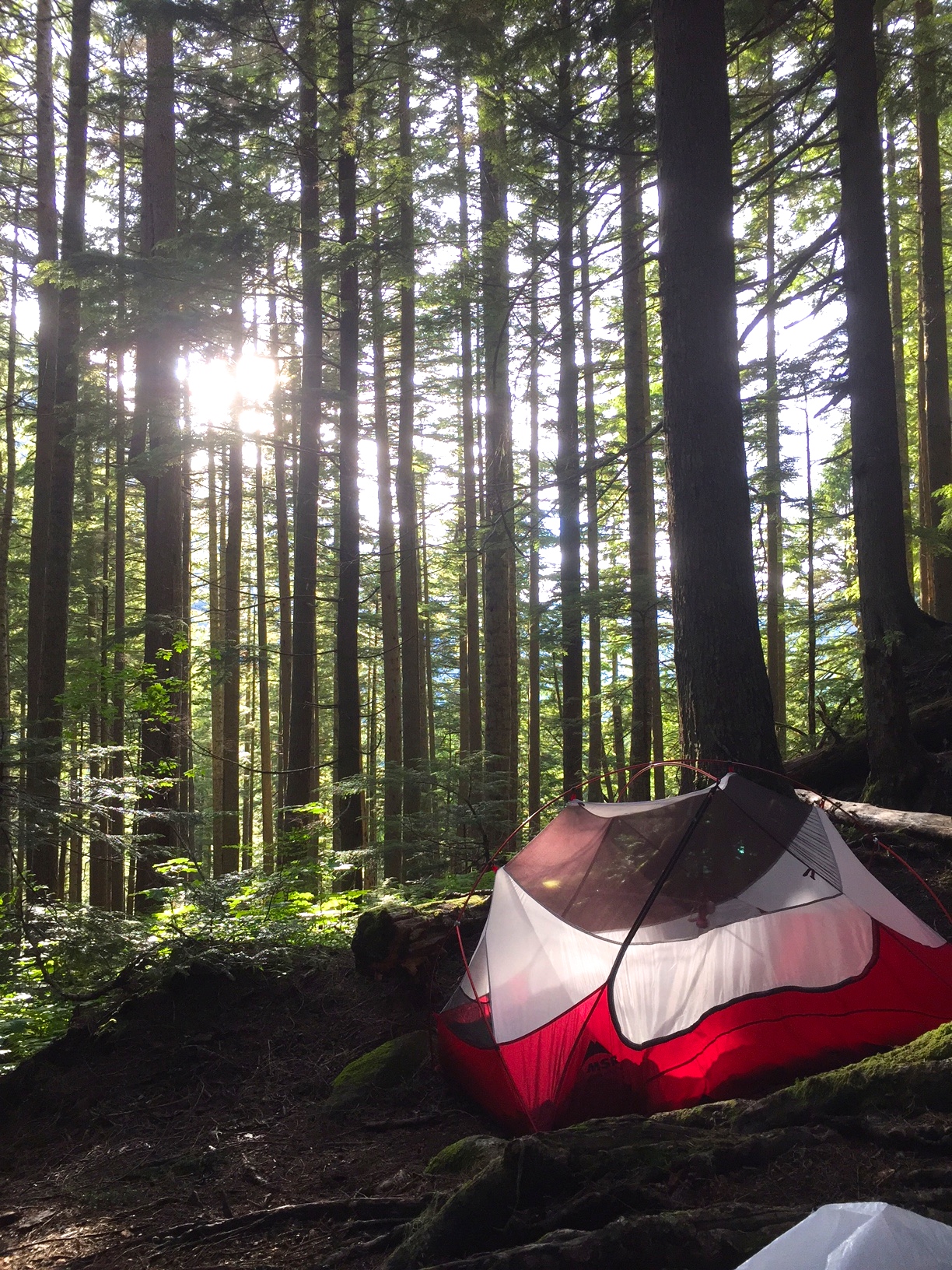 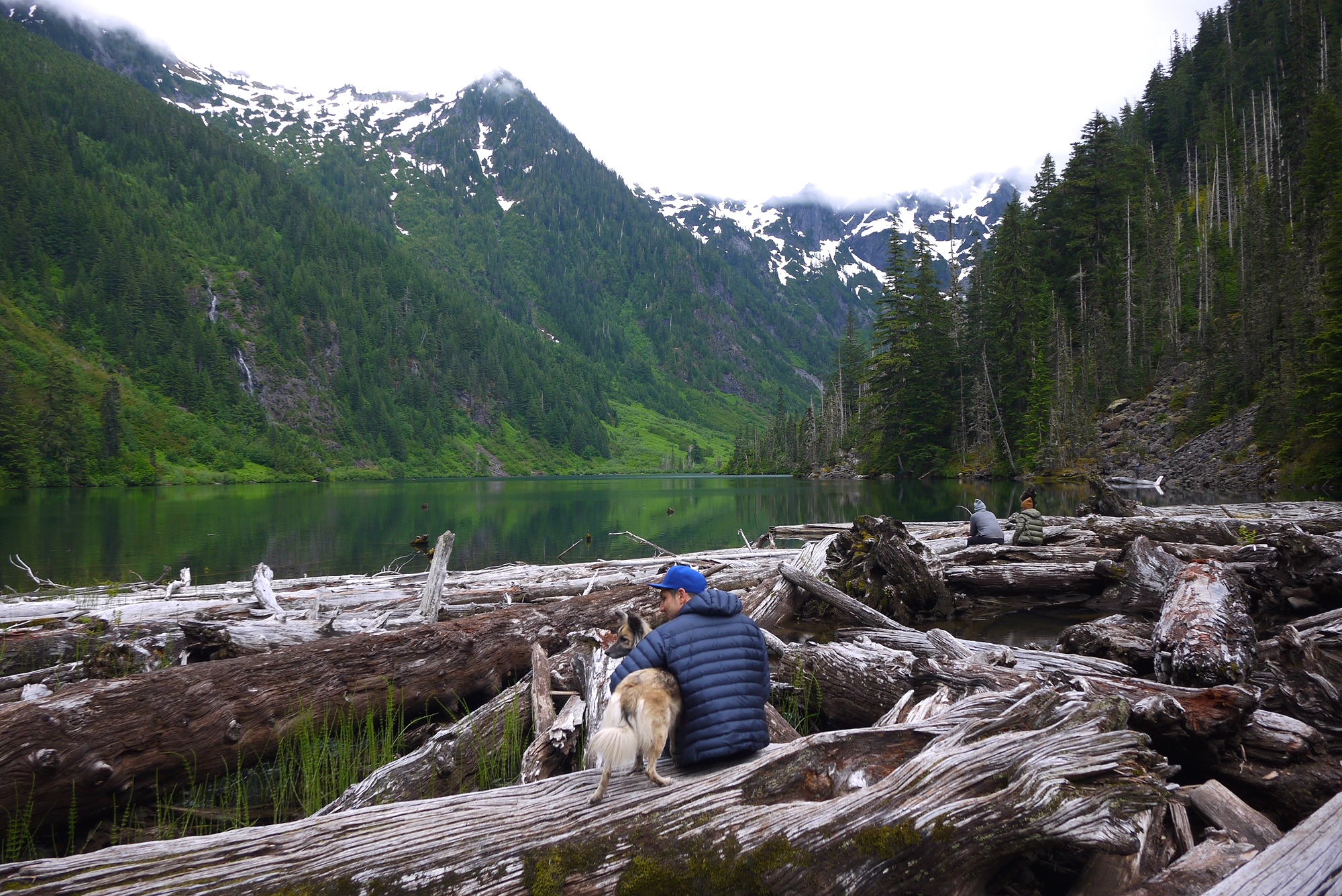 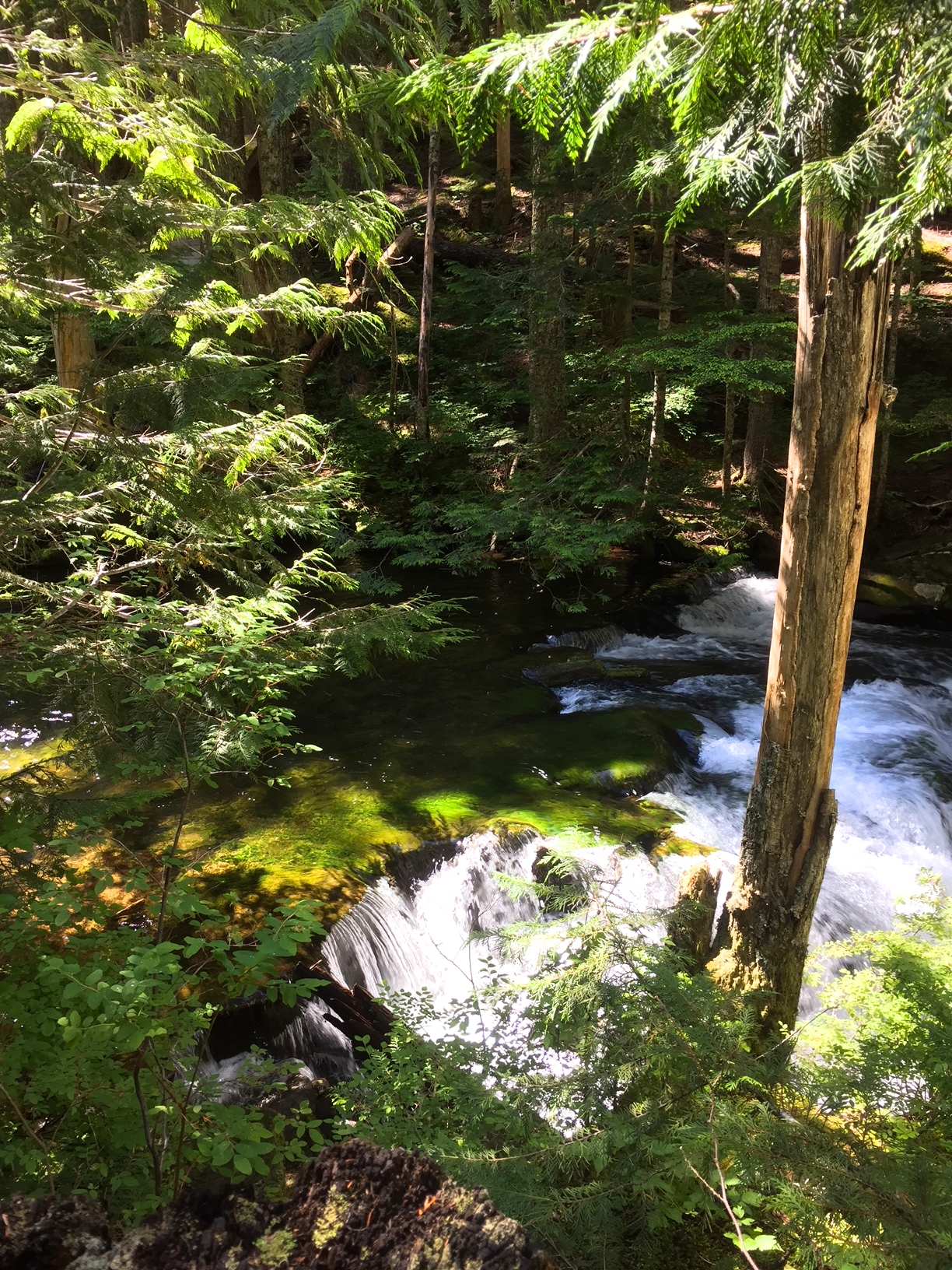 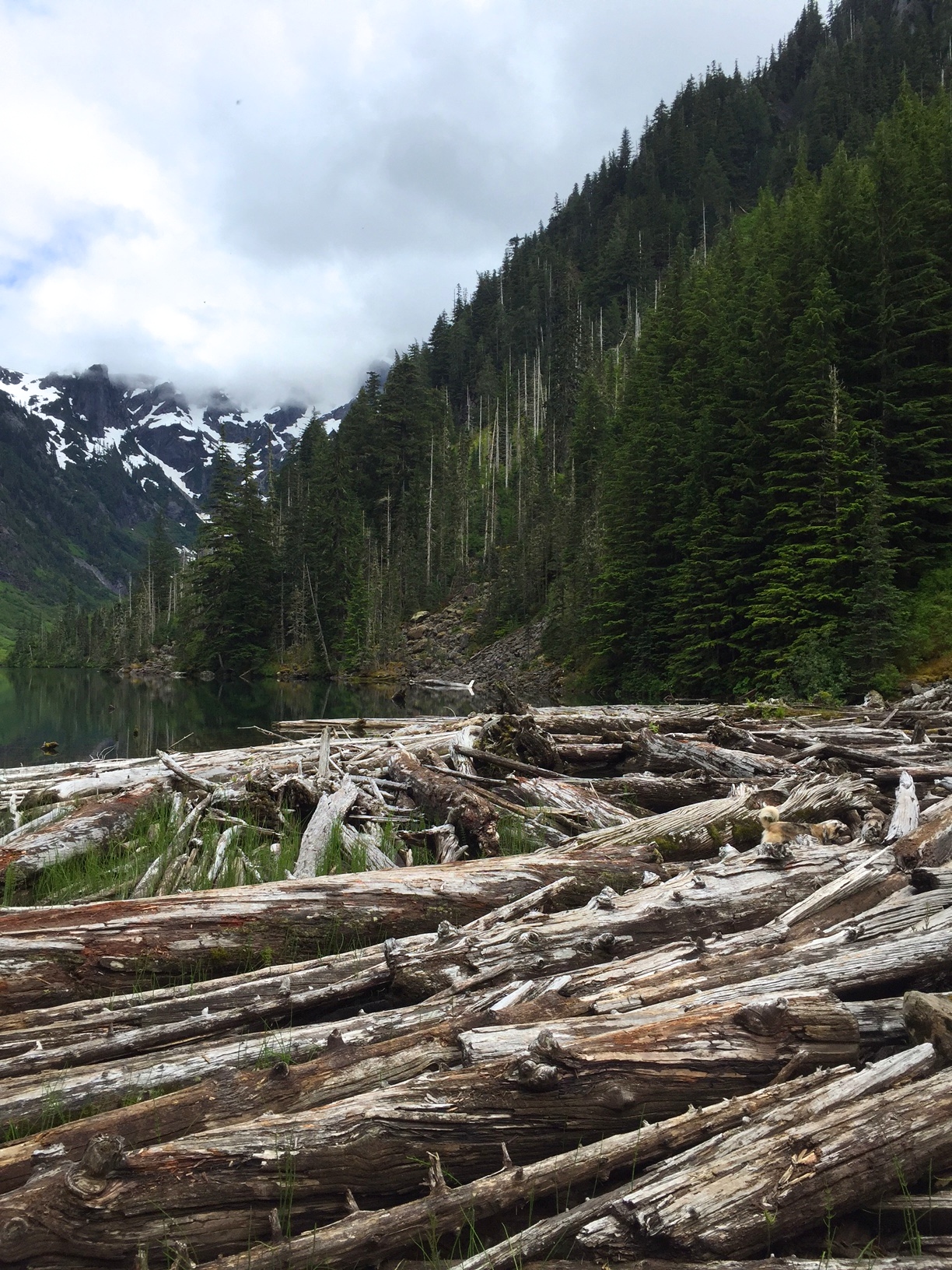 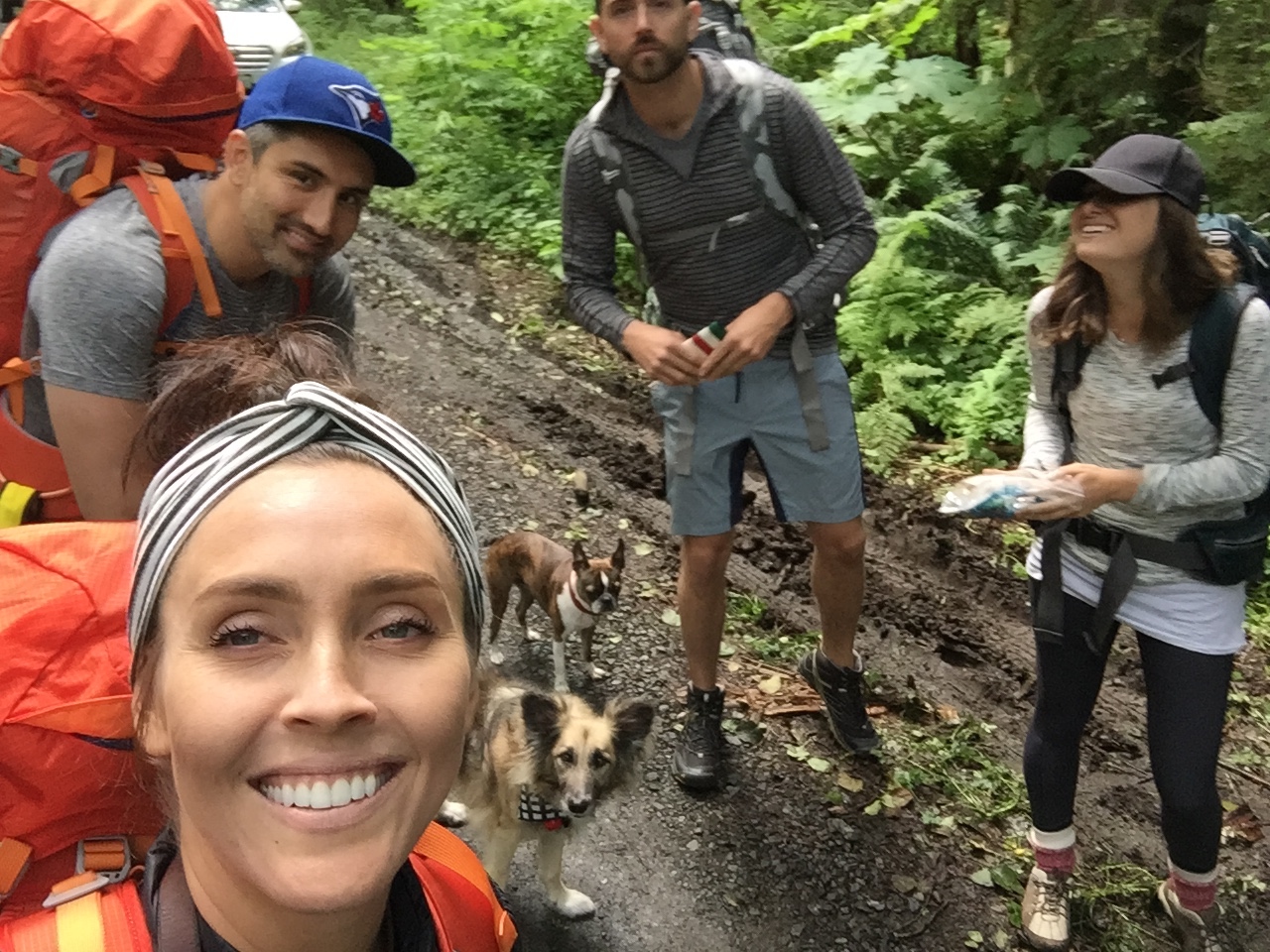 Tweet at me if you have any questions about the hike @erinireland.